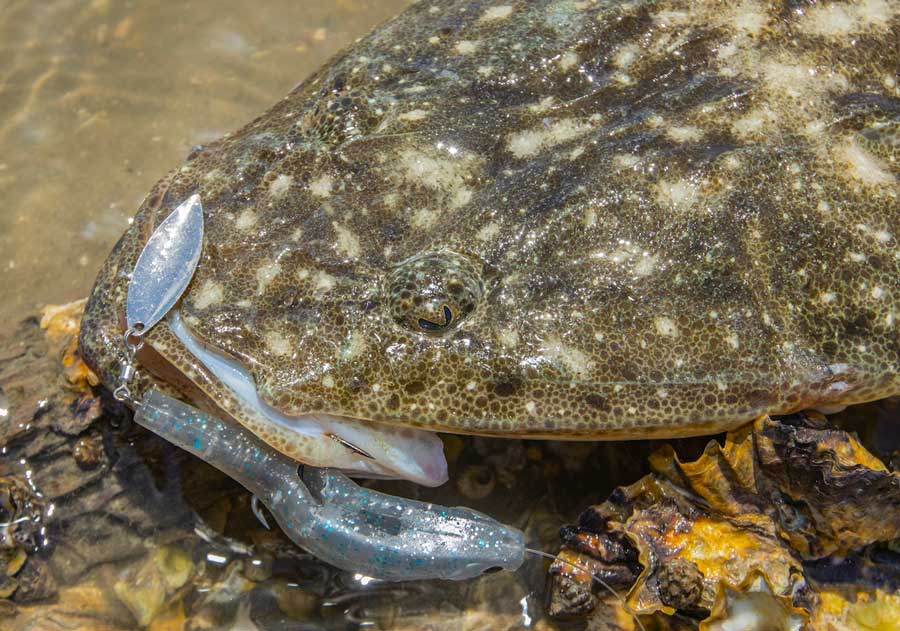 It’s always a surprise to receive lures in the mail and when they turn up in a ziplock plastic bag with no manufacturer name, tag or previous knowledge of them, it’s downright intriguing. I had a few lures turn up after a text message from Hooked Up magazine editor that read, “I’ll send you some lures, give them a go and see what you think”, and with that I focused on assembling and devising a target species and rigging options that might fool the local flathead population and some fat bass.

The only thing I knew about the couple of plastics I received was the lure was a 5.5in Dartspin, which was identified from the stamp on the trailing willow blade that was attached to a swivel and secured by the spiral of wire moulded into the rear of the lure. The moulded plastic is firm but flexible with a generous belly and back cavity to accommodate a variety of rigs, methods and scent-carrying capacity. Two back cavities are divided by a narrow slit that squeezes the hook point of a wide gape or worm hook and prevents it from riding above the top of the plastic. It’s ideal for consistent weedless retrieves yet allows hook exposure on the strike. The bulbous minnow body, with realistic eyes, tapers to a thin, round tail past the hook cavity, where the spiral of wire secures the tail spinner. There is a small hole either side of the tail that could accommodate a squirt of scent and the willow blade attached can be changed out or left off if that’s your preference. The rear eyelet and swivel won’t support another hook, but it was never designed to do so – it is simply there to add flash and attraction. 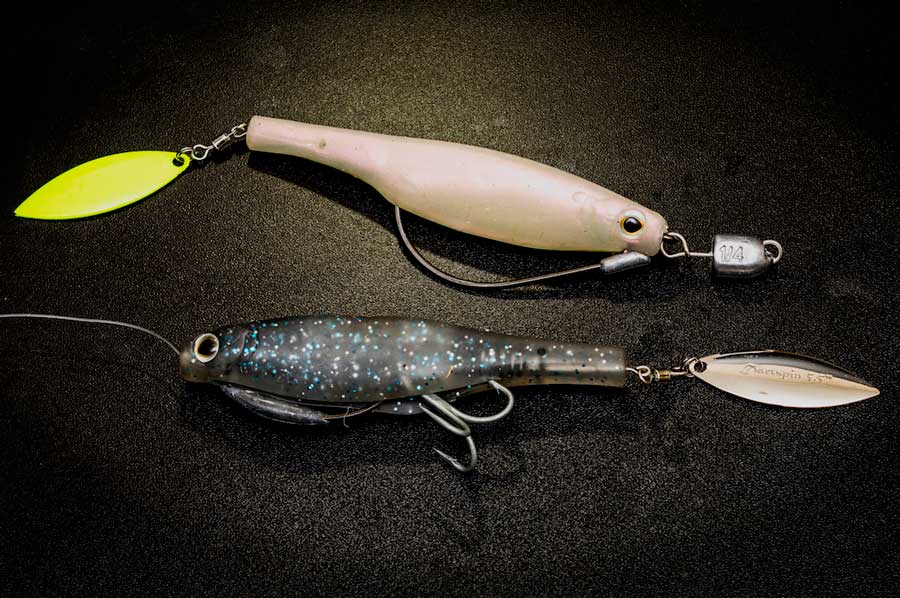 The back and belly cavities are perfectly suited to both a straight, head-weighted jig head or hooks like the weighted Owner Beast hook, around a 6/0, or the TT Lures SnakelockZ, again, in a 6/0 and a ¼oz. The larger wide-gape hooks rig perfectly through the centimetre-long hole in the back end of the plastic. The advantage of having a moulded hole in the plastic is the hook can move independently of the lure when a fish crushes down, exposing the hook point with minimal friction. The hook simply skids on the plastic with relative ease while maintaining weedless positioning with each retrieve. The belly cavity is long and flexible if you prefer belly-weighted wide-gape hooks – they work well, and it isn’t difficult to attach a treble stinger hook and secure it with a small lumo bead or clear tubing over the point of the main hook.

“The ability to fish weedless means you can target areas of patchy weed and sandbanks that are relatively shallow – and that is where they were christened.” 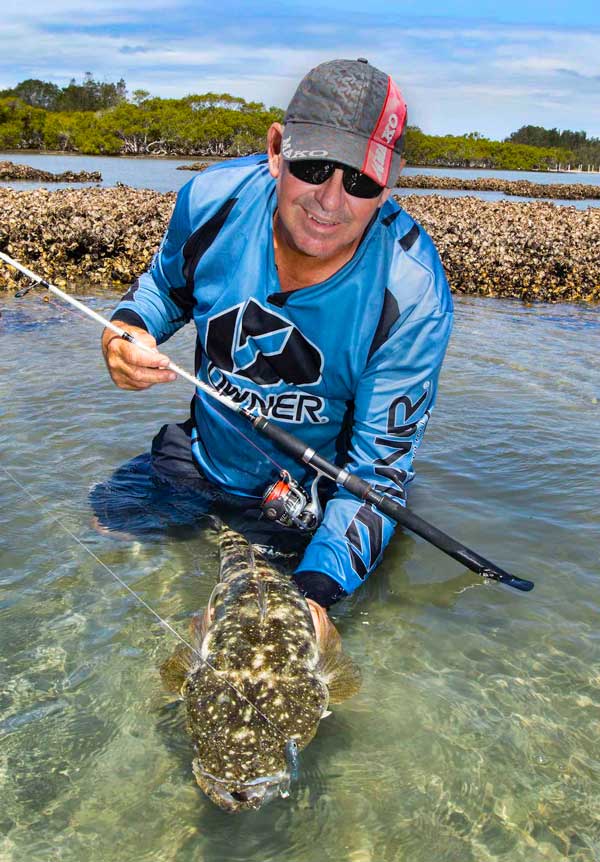 With 8lb braid and 20lb leader, I wasn’t mucking around or risking the only two Dartspins I had; it wouldn’t be much of a field test if I lost them to fish or snags without any photos. The beauty of the Dartspin is they lend themselves perfectly for chasing flathead and, I would imagine, jacks in south-east Queensland. The ability to fish weedless means you can target areas of patchy weed and sandbanks that are relatively shallow – and that is where they were christened.

They cast like a bullet and with no swinging trebles or loose hooks they don’t foul up, so they start working as soon as you kick the reel into gear. With the sun in the right position, it’s easy to watch the lures while you retrieve them as the flashing tail blade gives them away. It also allows you to halt or slow your retrieve and work it thoroughly across the sand or muddy patches where there is a likelihood of fish tucked up close to the weed edge. With a belly-weighted hook, the lure descends in a slight backward fall, aided by the weight of the tail blade and buoyancy of the lure body, which would help to get the lure under pontoons or into snag territory.

It wasn’t too long into the first session when I watched the lure breach a bed of weed and hover down over the edge onto the sand. Another short distance and it disappeared in a puff of sediment and a tightening of the line, when I struck, set off a landmine eruption of sand and instant howl from the drag. In just over a foot of water, the big girl bolted across the flats, thrashing and, at one point, porpoising through the surface. At 82cm she was a fine fish and one of many for the day, all in shallow water on the Dartspin. The one lure I used through the day held up well to the rough and raspy teeth and all the fish demonstrated a clear intent, without hesitation, to eat it. The lure’s size, shape and flash, as well as the ease of rigging, makes it perfect for chasing flathead or jacks and I reckon big bass or river cod would love them, too. I’ll keep you posted on the latter. All in all, a tidy and well thought-out plastic and if they hit the shelves at a reasonable price point they will be well worth adding to the estuary or river kit. 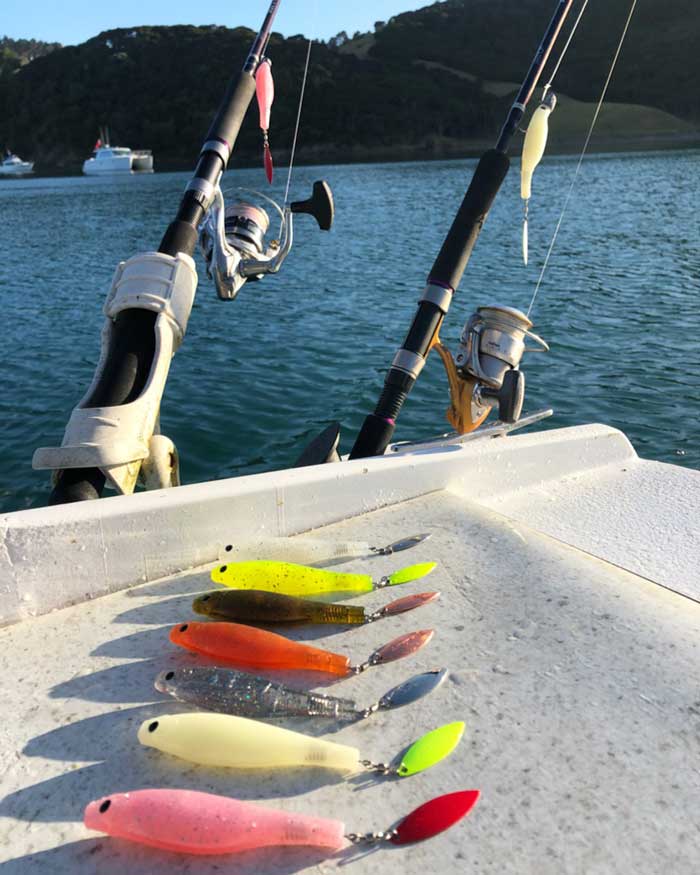 The Dartspins are a new product designed by Patrick Sébile and distributed to Australia, New Zealand and parts of the Pacific by Black Magic Tackle. They are sold in a two pack, unrigged and in seven colours. The Dartspin Pro is sold singularly and pre-rigged with a belly-weighted wide-gape hook. Check your local tackle shop for prices and colour selections.