Not only did it take out the top money, but the fish is also a New Zealand Big Game Fishing Council all-tackle record claim. No angler has caught a bigger marlin in New Zealand. Jorion’s fish eclipses Whakatane angler Don Hague’s all-tackle black marlin mark of 444.0kg caught on 60-kg tackle in April, 1978. It also comfortably beats the best blue marlin effort to date, R Greig’s 461.31-kg fish landed in the March of 1968, also on 60kg tackle.

But of more importance to the angler, the black marlin completes a ‘grand slam’ of billfish, with Jorion having now caught all of the billfish species – striped, blue and black marlin, shortbill spearfish, broadbill and sailfish. All but the sailfish have been caught in New Zealand waters out of the angler’s own boat, and his blue marlin, a solo effort of 235.2kg on 24-kg tackle, resulted in the Old Man and the Sea Award. 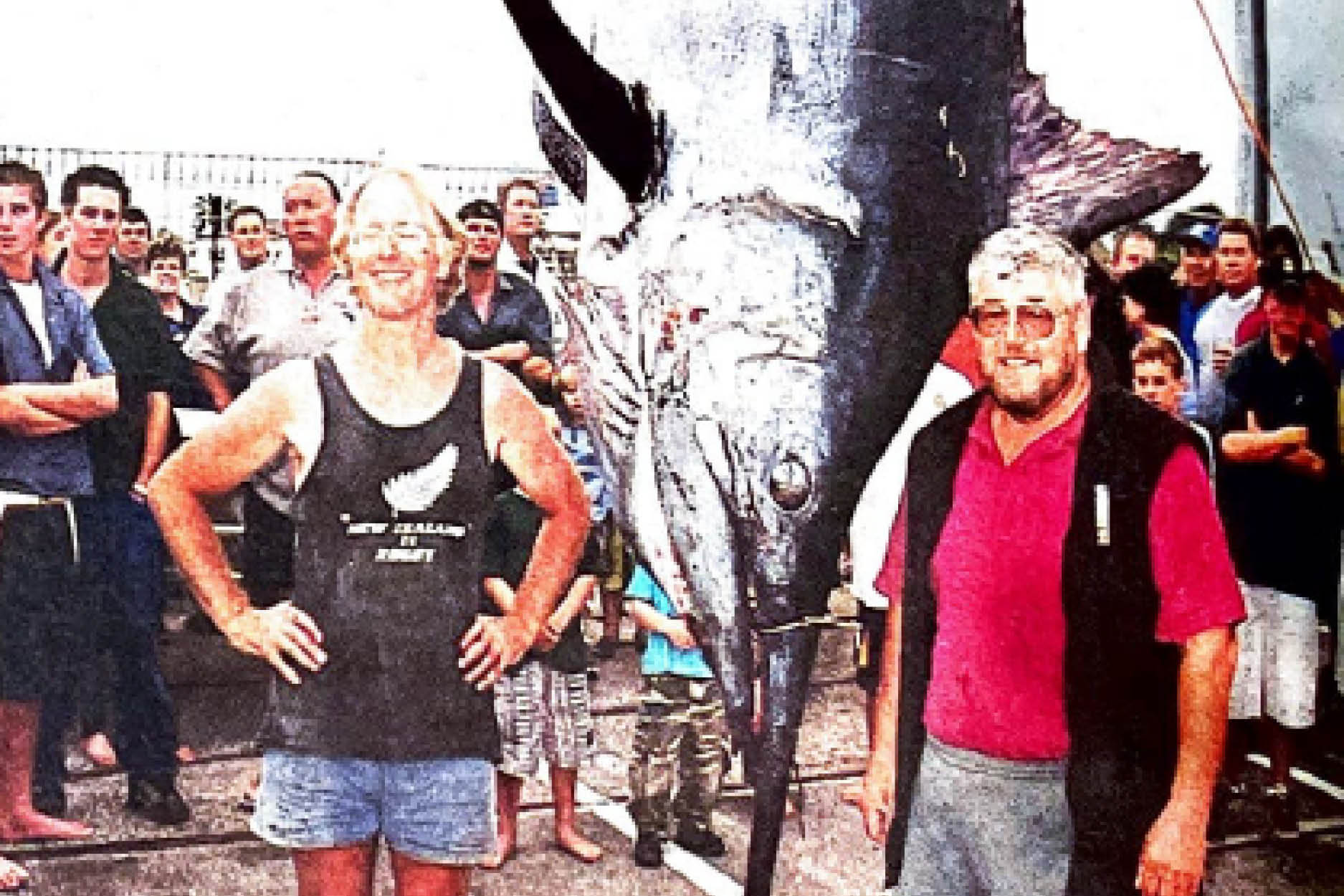 This article was first published in NZ Fishing News magazine in 2002 and is being re-published with permission from NZ Fishing Media.

Jorion is something of a trophy hunter, having shot a game animal ‘grand slam· of trophy heads, including red, rusa, samba, sika, fallow, Virginian whitetail and wapiti deer, as well as wild pig, wild sheep, chamois, thar and goat. The Jorions’ friends refer to their Mokorori Beach house as ‘Gisborne’s Te Papa branch’ as it contains so many mounted trophies. The black marlin is the crowning glory to Jorion’s achievements and one that did not come easily.

He and crew member Dave Peach were trolling in the vicinity of South Rocks, some 12 miles out from Tatapouri, when they had a double strike of small kingfish. While dealing with them, the starboard rigger went off, the big black scoffing a lure of Jorion’s own making. Nearby boats got a good look at the big fish as it performed on the surface before heading towards the open sea, running off 700 metres of line with its initial burst.

The two kingfish were quickly brought in and the scrap began in earnest. Initially the fish stayed deep, but as time went on it was worked to within 50 metres of the boat, where it basically stayed for the latter half of the fight. Often the lure could be seen tantalisingly close, but the trace remained out of reach.

Conditions were less than perfect and the fish had plenty of tricks up its sleeve. Several times disaster was only just averted, with Peach having to drive away, the reel in virtual free spool, in an effort to avoid running over the line.

The battle was taking its toll on the angler who, throughout the fight, was vomiting over the side as well as suffering cramped forearm muscles from all the winding. As the seven-hour mark approached, Jorion had had enough, so they decided to back off the drag and take a rest as well as take on some sustenance before making one last effort to get the fish close.

If it had not budged the line was going to be cut as close as possible to the fish, allowing it to swim free. The longer theses fights go on, the more they favour the fish. One section of the Black Magic [IGFA] Hi Viz line had been repeatedly run back and forth through the rod guides as the stalemate continued. Similarly the 400-pound Black Magic Hard Trace was taking a hiding, constantly rubbing against the bill and body.

Just as Jorion pushed the drag back up past strike to the 15-kg ‘sunset’ mark (at which most of the fight had taken place) then began to rise and the fish popped up onto the surface. The mad panic began to retrieve the line and the leader was quickly in hand, with both men taking wraps one after the other.

With the fish now at close quarters and still swimming strongly, the tag went in followed by flying gaffs in the tail then head. The fish had been taken and a new marlin mark for New Zealand set. Securing the fish alongside was one thing, boating it was another. Fortunately the NZ Fishing News team was on hand, transferring two crew aboard Freedom where, after a great deal of struggling, the huge fish was wrestled aboard.

The drama was not over yet. On arriving back at Tatapouri ramp the fish could not be raised on the gantry, so it was taken to the Gisborne clubrooms where the hydraulic winch proved ineffective against such great bulk as well. Eventually a club member prevailed with his mobile crane and the fish was officially weighed, tipping the scales at 473.2kg.

Tired but elated, Jorion paid tribute to the efforts of crew member, Dave Peach, who had played a big part in the capture, not only in keeping the boat positioned but by supporting the tiring angler as well. “I think Dave will invest in a set of ear muffs the next time we go out,” Jorion quipped. Two mounts of the fish will be made; one for the Gisborne-Tatapouri club, the other for the angler. 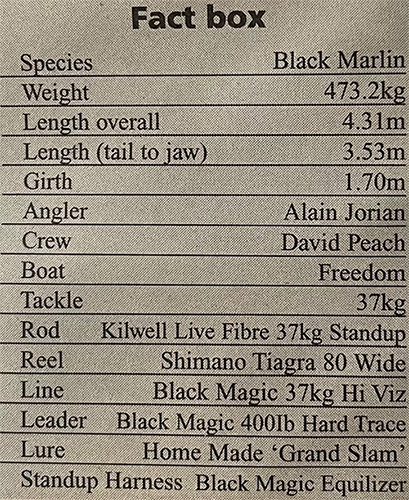