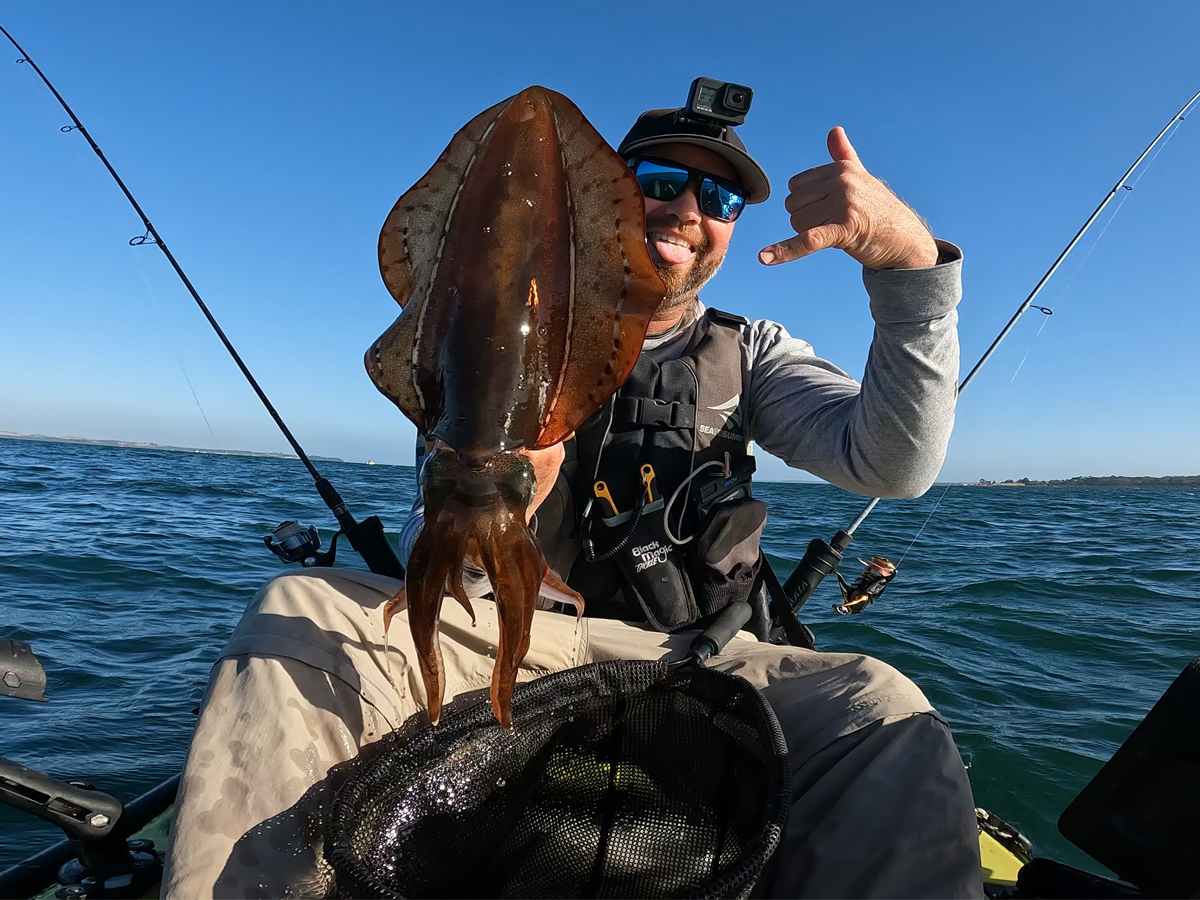 Species: Arrow and Broadfin Squid are the most common species caught by recreational anglers in New Zealand and Australia. However, most prefer to target the much tastier Broadfin Squid which lives in shallower water, making them accessible to both small boat and landbased anglers

Sizes: In New Zealand, these species are most commonly caught between 15-30cm in hood (or mantle) length, while in Australia, they can grow up to 50cm.

Squid are cephalopods with elongated bodies, large eyes, eight arms and two tentacles. They are mainly soft-bodied but have a small internal skeleton in the form of a rod-like gladius or pen, made of chitin (a protein similar to keratin).

Most fish prey through vibration, whereas Squid utilise their excellent eyesight thanks to their large eyes and ability to see well during the day and at night. They can only see in monochrome but are able to see more shades and tones of monochrome than humans.

If a Squid is hungry and hunting for food, they will go for most things (small fish, prawns etc) that come within grabbing distance. However, if they’re not hungry, they need to be visually attracted to entice them to feed.

Squid typically live for around 12 months, and during their lifetime they feed intensely until they lay their eggs in the vegetation on the seafloor. Their size depends on their ability to consistently find and catch food.

When and where you’ll find them

You can target Squid all year round, but you’re more likely to catch large Squid between August – December.

You can target Squid from just about anywhere – inshore off the rocks, a wharf or pier, or offshore on your boat. The main things to look for are broken ground, rocks, weed beds or around reefs. Squid use cover to hide from predators but also to ambush prey, and to lay their eggs during spawning season.

You’ll find Squid in in depths from half a meter up to 40m, but they’re most commonly found in 3-6 meters of water.

You can catch Squid anytime of the day or night, but most experienced anglers prefer to fish a dawn and dusk as this is when the Squid are most active.

Squid can be and are caught during the middle of a bright sunny day, especially if the jig is left to sink down near the bottom where Squid hide in ambush, but you’ll usually have to target them in deeper water during the day.

As for tide conditions, ideally best times and generally most productive are the end and the start of the tides especially during flood tides.

How to measure Squid:

How to fish for Squid

The most common method to target Squid is with egi jigs. But there are a number of techniques you can use to attract and entice Squid to take the bait.

The lift and fall technique involves a simple cast out to your target. Once your jig has dropped down through the water column, lift your rod to 90 degrees and then allow the jig to fall back down through the water column to the bottom. Continue this process until your target takes the jig. Try not to allow any slack line – this limits your ability to feel any contact your Squid may have with the jig.

The rip and fall technique is similar to the lift and fall. Cast out to your target, and once your jig hits the bottom deploy a quick, sharp lift of your rod to 90 degrees. This delivers a faster and more aggressive action which will grab the attention of even the laziest Squid.

The rip and crank technique is similar to your traditional jigging techniques. You start by casting out to your target and letting the jig fall to the bottom. Once it hits the bottom, wind in any slack line, point your rod tip towards your jig and then rip your rod up 45 degrees, as fast as you can. Once the jig is off the bottom, work your rod from left to right a few times. Each time you lift the rod, wind your reel one turn. This will wind in about 30cm of line, and this will help create an aggressive left to right movement of the jig.

If the Squid are staying near the bottom and the other more subtle techniques aren’t enough to attract their attention, the burn technique is designed to annoy them so much that they will attack to protect their territory. Cast past where the Squid are, point your rod tip at the water (in the direction of your jig) and use a constant up and down jigging movement (about 40cm) while winding in your line. 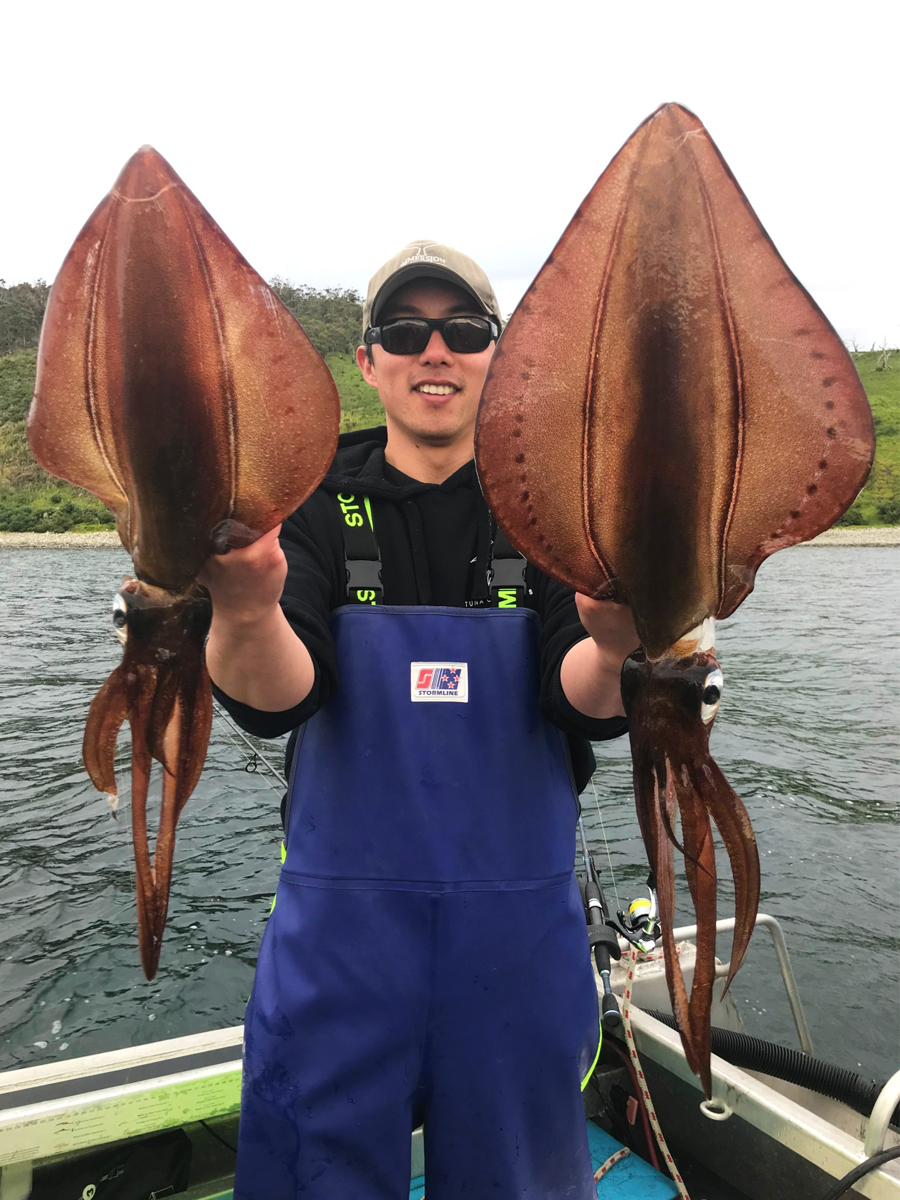 No matter what technique you use, there are a couple of key things to remember:

Squid can be caught using any rod and reel, or handline, but using rods specifically designed for Squid fishing not only improves your catch rate, but also makes it more enjoyable.

If you’re landbased fishing (off a pier, wharf or jetty), an 8’3” rod is the ideal length. It aids in casting line control, jig action and most importantly, it’ll give you a better hook up rate. The action of these longer rods allows you to cast further and are designed to give your jig a more natural movement in the water. They’re also designed to act like a shock absorber and won’t rip the jig out of the squid when it lunges.

A 2500-3000 reel is more than adequate, and reels with a shallower spool are ideal for braid and long distance casting. 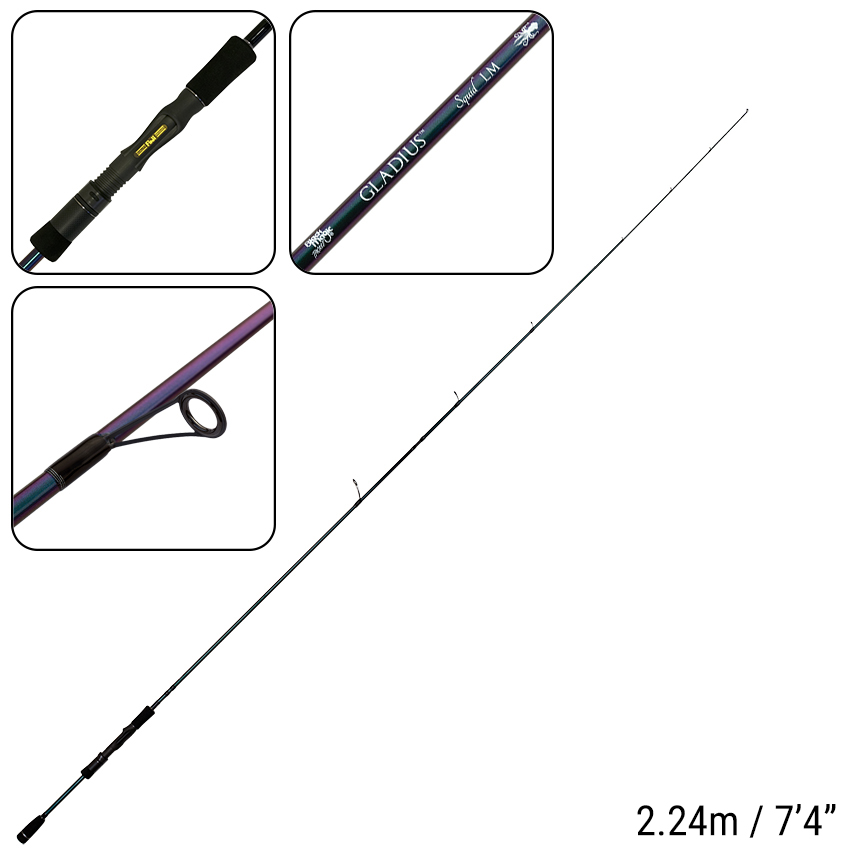 Whether you’re fishing off the beach, off the wharf or from the boat, casting is a core technique for Squid fishing. You need a line that will deliver the distance you need to hit your target.

Hyperglide® 13x braid is a round, super fine braid that is specifically designed to deliver a longer and smoother cast.

Constructed from 12 Japanese PE fibres woven around a strong central core, creating a very smooth line that retains its roundness.

This means the braid will glide silently and effortlessly through your guides, improving your distance and accuracy (compared to a standard braid which typically has a flat structure).

It also means less drag as it sinks down through the water column giving improved lure presentation and a higher level of sensitivity. 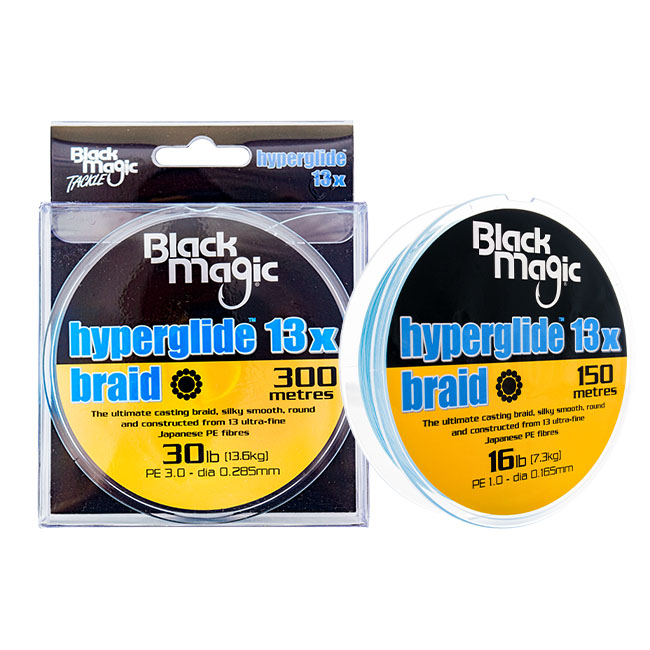 In slightly murkier or dirty water, clear Fluorocarbon will stand out as a single line, and will likely detract the Squid from approaching. Therefore using a pink leader is recommended because it blends into the water as pink and red are the first colour spectrums to disappear under the water’s surface.

Our Ultra Pink Deception (mono) Leader in either 10lb or 12lb, has an outer gloss coating which makes it less reflective in water, and is extremely supple for natural lure presentation. 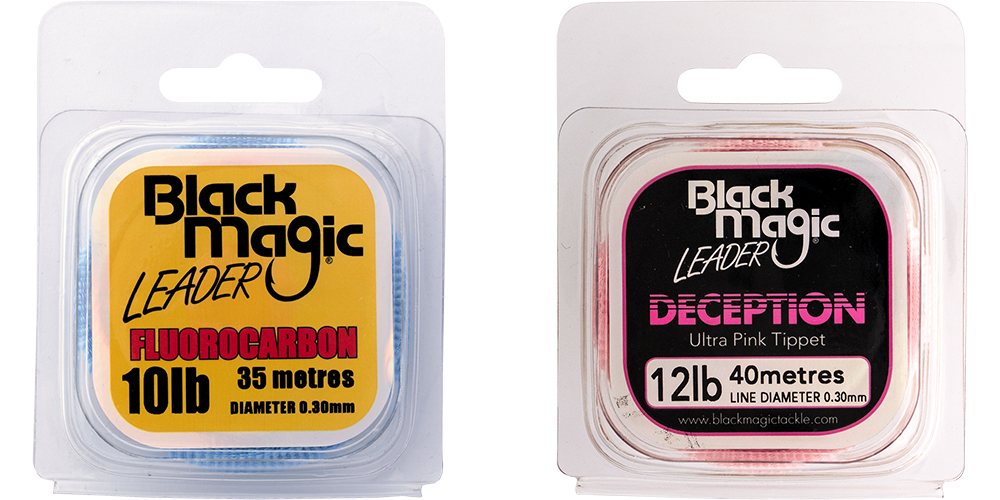 Squid jigs come in a variety of sizes and colours.

If fishing at the start or end of the tide, when the flow isn’t as strong the smaller size 2.5 – 3.0 jigs will sink slower and be in the strike zone for longer period.

As the tide flow increases, its recommended switching to 3.5 sized jigs.

On sunny days and when fishing in clear water, natural coloured or white coloured jigs tend to work better.

When water conditions are slightly murky, lumo or “glow” jigs tend to work the best.

But its always recommended that you carry a good selection of different size and colour jigs so you can so you can test out what colours and sizes are working on the day.

Check out our guide to find the best Squid Snatcher® for your fishing environment . 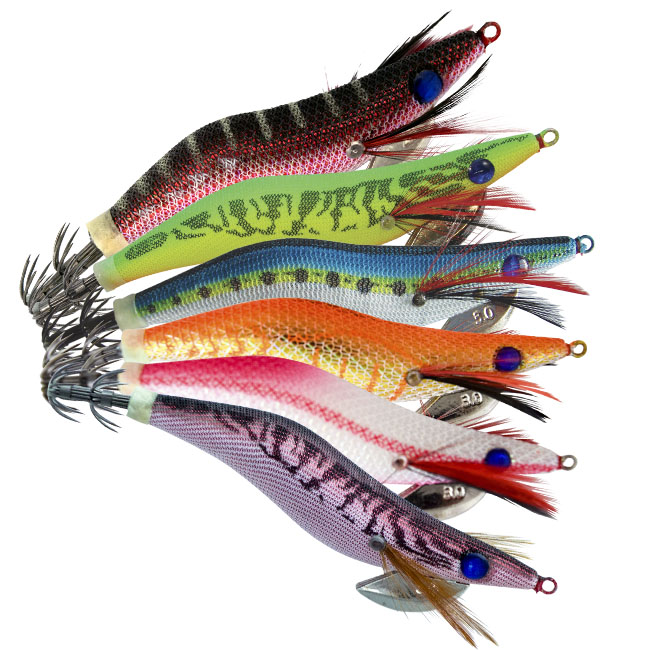 Read more about our Squid Snatchers®

Squid Snaps make changing jigs super easy. Simply tie onto your leader using a uni knot and you can swap out your jigs quickly and easily.

Our Squid Snaps are black on purpose as a bright or shiny swivel may cause the Squid to strike at it, as opposed to at the jig. 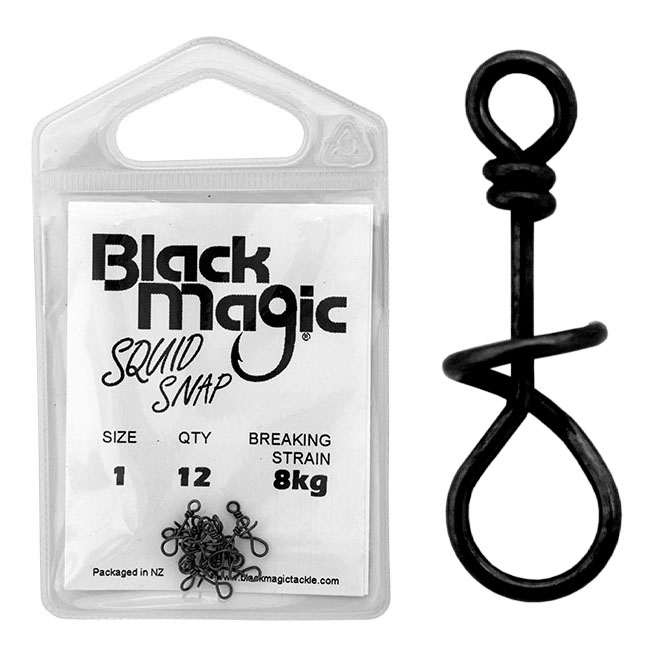 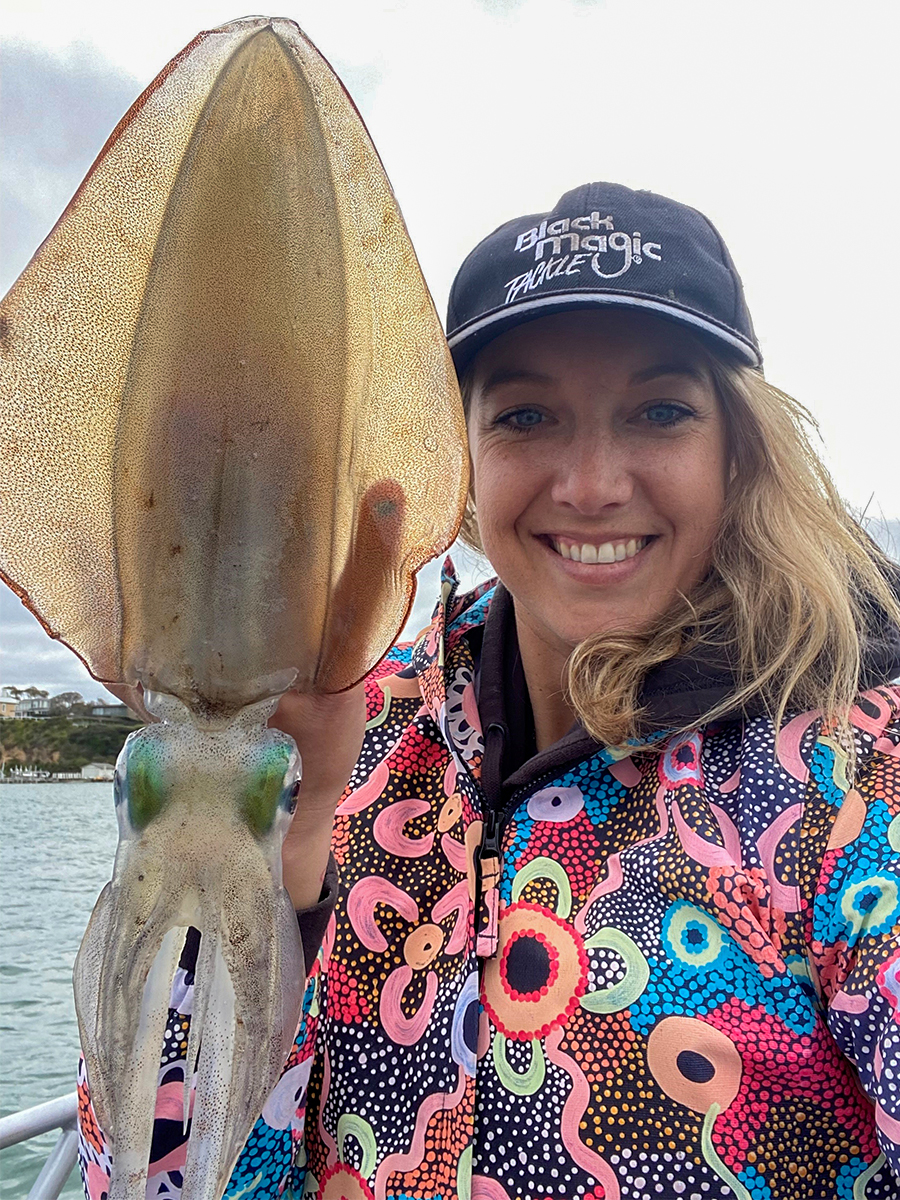 Starting out or topping up?

Our Squid Pack contains gear valued over $140, including

* Contents may vary depending on product availability 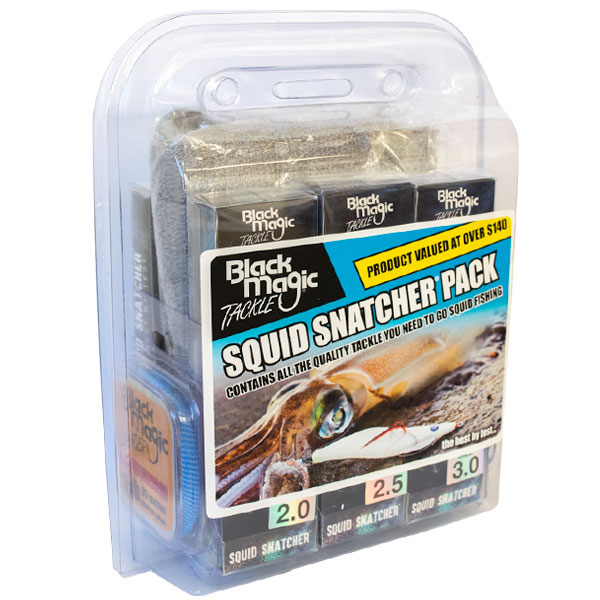 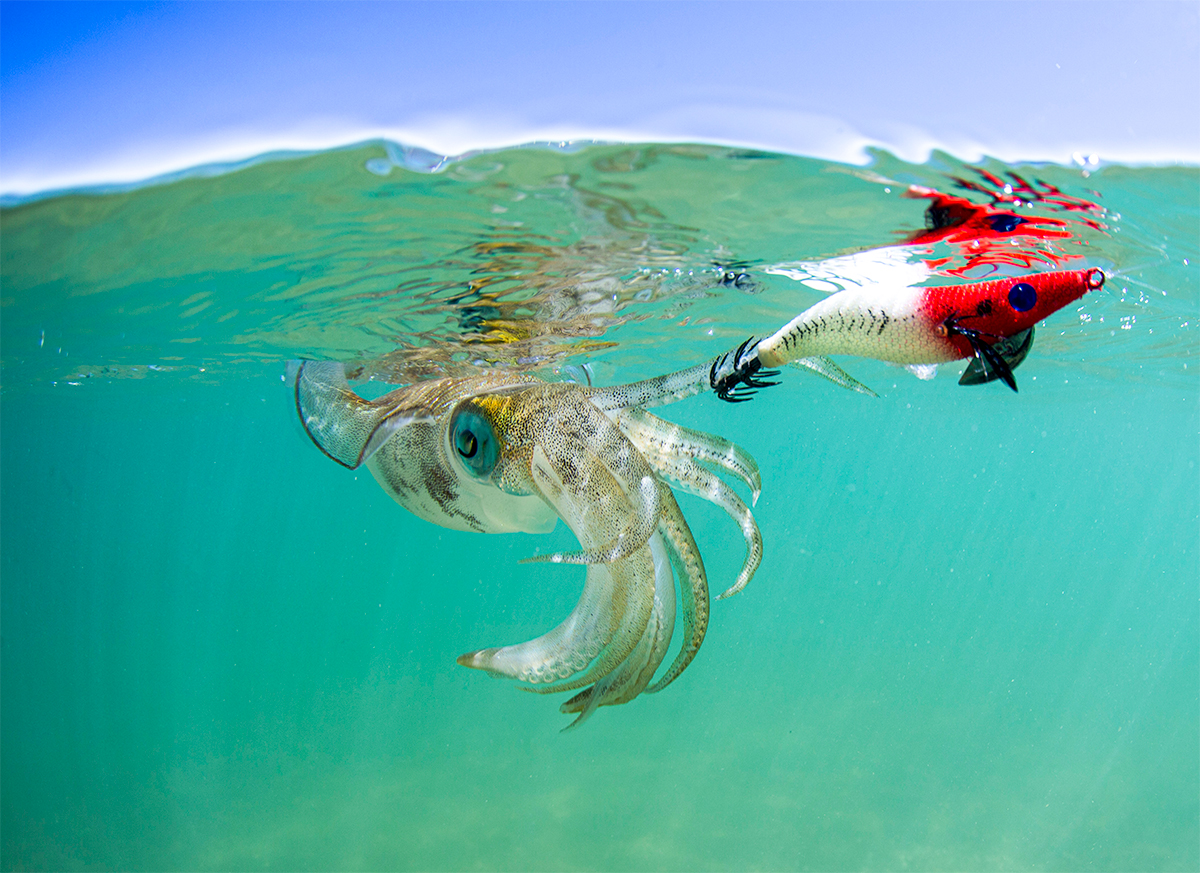 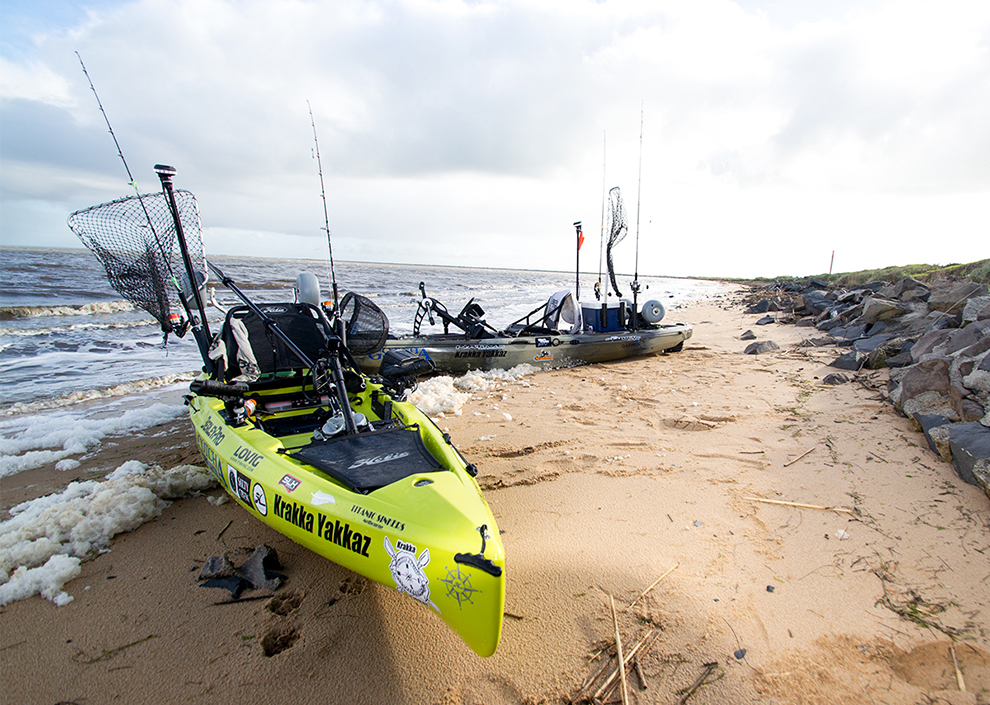 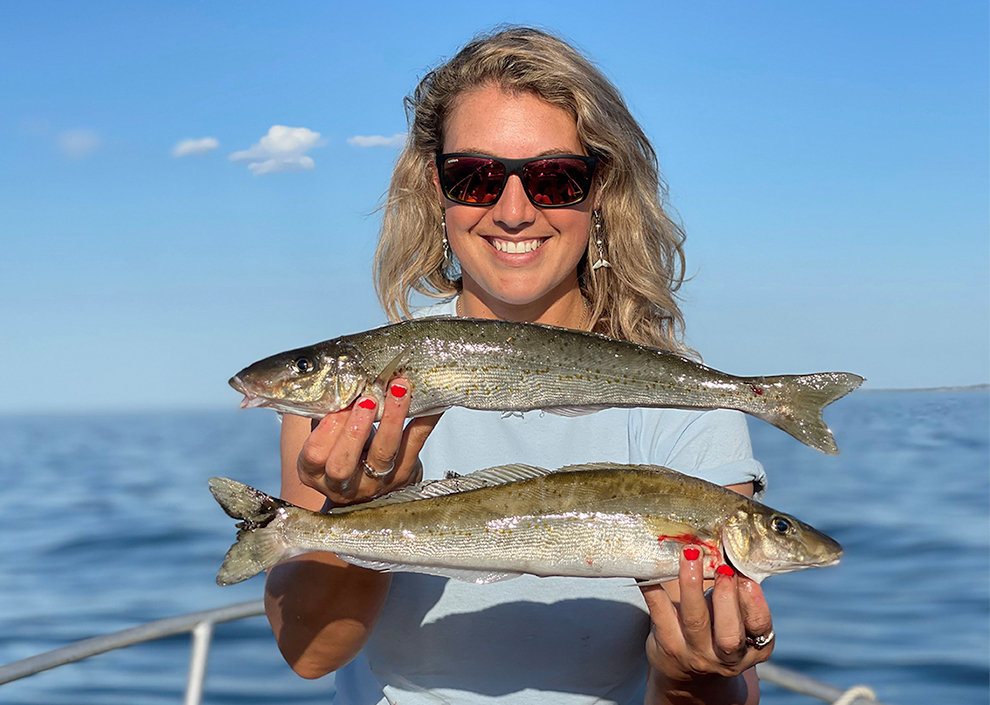 Chasing a feed of King George Whiting, or wanting to try this tasty species for the first time? In this article from Hooked Up Magazine it lays out all the foundations [...] 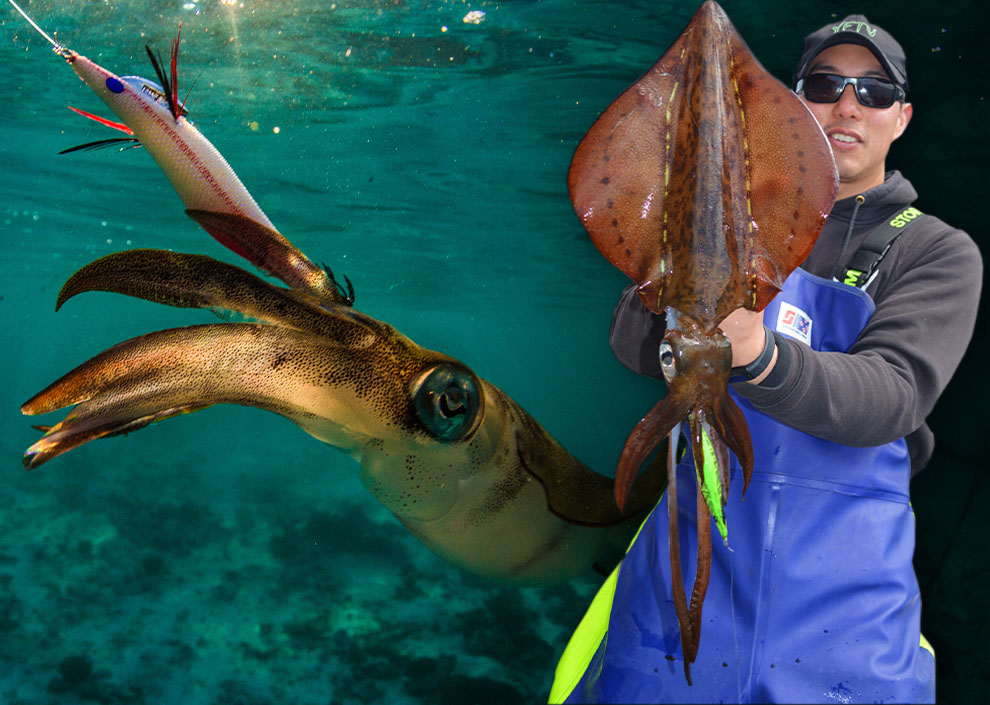 These videos take a look at Squid fishing in New Zealand and Australia with loads of awesome tips from local Squid fishing experts. The tips and techniques used in this video can be used [...] 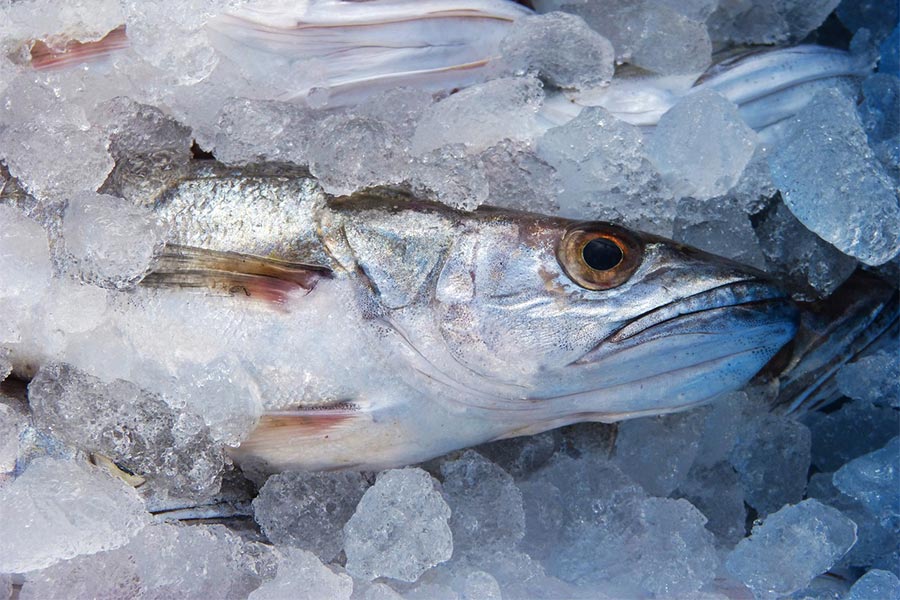 The most overlooked and without doubt the most important aspect of your whole set up when targeting any species of fish is the hook. I am amazed at how many times I see [...] 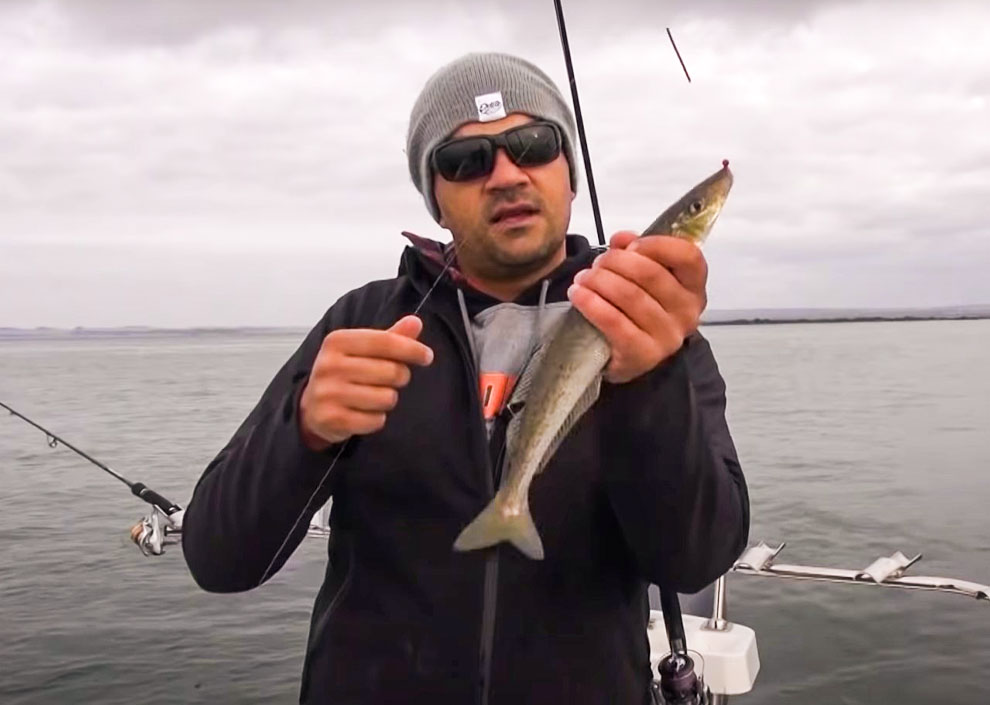 How to catch Whiting

How to catch Whiting

A detailed step-by-step tutorial on how to catch Whiting, especially during the cold winter months. Video by Hooked Up Magazine